(Actually We Are Rocket Scientists) 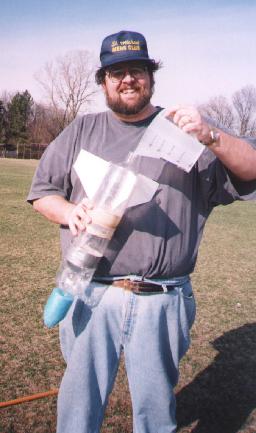 Here I am getting a rocket ready for launch. This picture was taken helping out with Jessie and Ted's science project. Also show my 3rd generation launching setup. Pictured is a KMART Nautalus Deep Cycle Marine Battery, a TruckAir 12 volt air compressor (from Kmart), the white PVC with the pressure gauge has the tire valve and in the input side. The thin black tubing is about 20' long and goes to launch tube using an internal O-ring and the "old fashioned" prop-stick lever holddown device. I am building a Clark Cable launcher (see below). 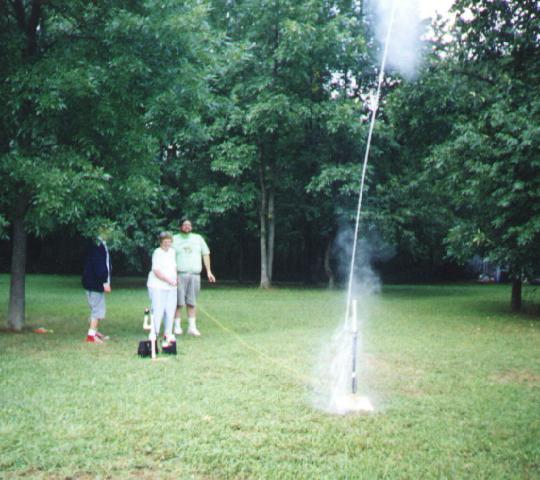 Here is my 85 year old grandma launching a water rocket rocket. She got a real thrill doing it. This picture and following one were taken at a family party where I decided to provide some entertainment.. Always travel with your rockets!!!

This was my prototype "Clark Cable" launcher. I painted the PVC blue. The gold tube under the rocket is the cuff holding the cable in place. The blue tube is capped at the bottom and fits into a socket (a threaded PVC adapter) that is screwed into iron floor flange. The rocket being launched is my "Cub Scout" rocket. It has fins cut out of a plastic NO TRESPASSING sign taped to the side using Duct Tape, and has a tennis ball taped to the top.

My two oldest kids can be found on the front page of the Southfield Observer-Eccentric Newpaper, Sunday May 3rd 1998 edition. They are shown launching water bottle rockets at the Eisenhower Elementary School Science Fair in Southfield, Michigan. Both won BLUE RIBBONS at the Science Fair.